Kathakali by senior artists from Kerala in Singapore! Yes. There is a Katahakli organized by Mudra Cultural Society in Singapore on July 10th and 11th. The stories are Nalacharitham 2nd day and Keechakavadham. Artists include Prof Kala Balasubramanian, Kott. Devadas, Kott. Madhu, Kala. Vijayakumar etc. For more details and purchasing tickets online, refer, http://mudrasociety.org/. Hurry!!!! Grab your tickets for this exciting performance now!!!
Posted by Ganesh-Iyer at 10:51 AM No comments: 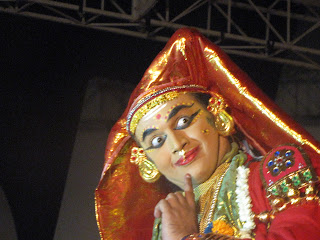 
Story is as follows: 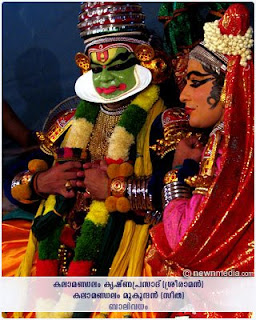 Scene1 (Rama, Seetha, Lakshmana)
Rama, his wife Seetha and his brother Lakshmana are living in the forest "Panchavadi". One day, they saw a golden deer. Rama shows that golden deer to Seetha. The deer is amazing. It has silver legs, golden body. It jumps and plays while eating grass. She expressed her desire to get that deer. (Actually that deer is the demon Mareecha came to help the demon King Ravana to abduct Seetha). Rama tells Lakshmana to take care of Seetha and he goes to catch the deer. Rama tries to catch the deer in several ways, but he can not catch it. It runs away many times. At last, Rama understood that the deer is not a normal deer and he kills the deer using an arrow. Suddenly the deer cries in the sound of Rama asking help from Seetha and Lakshmana.
Scene2 (Seetha, Lakhmana) 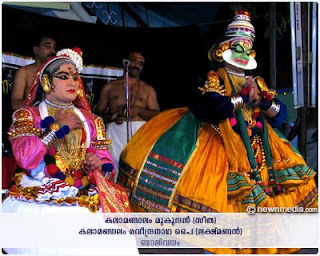 Seetha heard the crying sound from the jungle. She tells Lakshmana to find out Rama and help him. Lakshmana tells Seetha that there is nothing wrong happened to Rama and those sounds are tricks by demons to cheat them. Seetha misunderstood Lakshmana and blames him a lot for not going to help Rama. Lakshmana decided to go and he makes a circle around Seetha (called as Lakshmana Rekha) and tells her not to go out of that circle. The circle is an aid to help her from any unfortunate things. Seetha agreed.
Scene 3 (Seetha, Saint Ravana, Ravana, Jadayu) 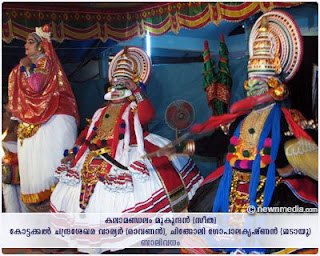 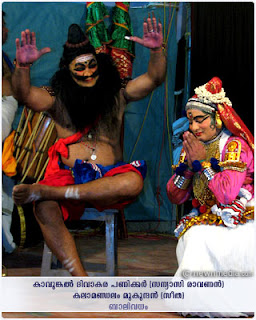 At that time, the demon king Ravan disguised himself as a saint comes near Seetha. Seetha comes out of circle and respect the saint. Saint asks whereabouts of Seetha. She tells that a demon came there in the form of a golden deer and her husband went to catch that demon. He will kill that demon deer and come back soon. Then the saint says that he has no time to wait there. He is none other than the great king Ravana. He takes his actual form. He decided to catch Seetha. But then he remember about a curse to him (that if he touch a lady without her permission, his head will break in to pieces). So He takes the part of earth where Seetha is standing and travels back to his kingdom in his aero plane "Pushpaka vimana". Seetha cries to get help from someone. Hearing her cry, Jadayu, a vulture who is friend of Rama's father Dasaratha comes there and asks Ravana to free her. Ravana did not listen to him. They fight each other and at last Ravana cuts the bird's right hand wing. The bird falls down. Seetha bless him to be alive until he meet Rama and tell what happened.
First female character photo: Ganesh Iyer as Seetha
Acknowledgement: Remaining photos from http://kaliyarangu.blogspot.com/search/label/BaliVadham
Posted by Ganesh-Iyer at 11:22 PM 4 comments: 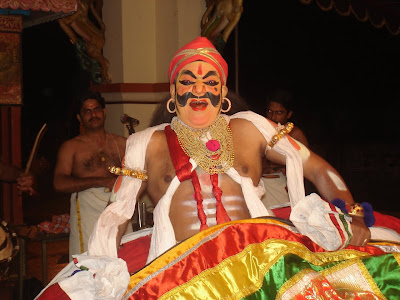 This is a beautiful story written by Irayimman Thambi. This story takes place when Pandavas were living incognito. Yudhishtira (as Kankan) was political advisor to Virada King, Bhima (As valalan) was cook, Arjuna (Brihandala) was a dance teacher, Nakula was horse keeper, Sahadeva was cattle manager and Panchali (Malini) was a maid servant. 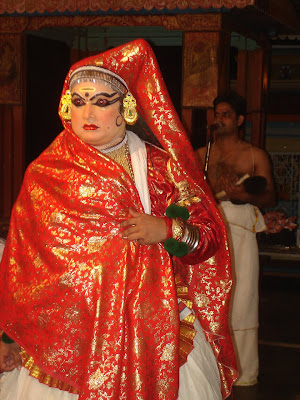 The story begins with the "Tiranottam" of a wrestler. The wrestler came from a different country and he claims that nobody can defeat him in wrestling. He came to Virata's country and challenged everyone. Nobody could defeat him. Knowing this, Valalan came and defeats the wrestler in a wrestling competition (called as Malla Yudha). 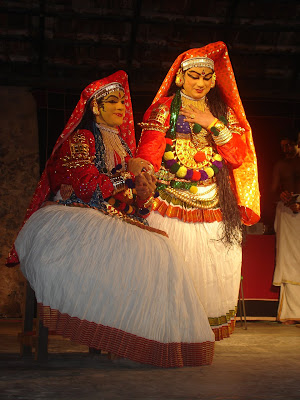 When Malini was plucking flowers to make garlands, Keechaka (brother of Virata queen Sudeshna) saw her. He 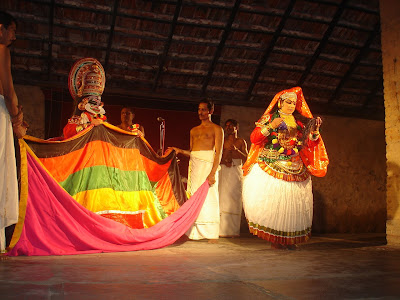 suddenly fall in love with her because she is so beautiful. Keechaka asked her to go with him to his palace to stay with him for a night. She refused it and left. Keechaka keep on thinking of her and he is not able to do anything. So he decided to approach his sister.

In next seen, Keechaka comes near Sudeshna and asks her for a favour. He told her that he wants the presence of Malini. Sudeshna first oppose him, but due to her love towards her brother, she agree with him. 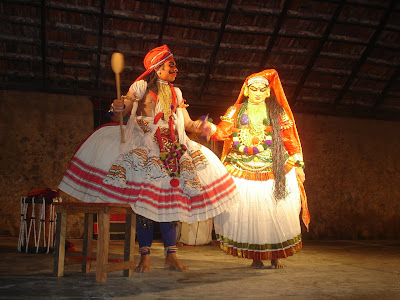 Now Sudhesna calls Malini near her and praises her a lot. Then she order Malini to take food and wine to Keechaka's room. She strongly opposes and cries. But Sudeshna was firm on her decision. Thinking about her situation, Malini goes to Keechaka's room as if a female deer is forced to go to a powerful male lion's den. Keechaka asks her to stay with him on his bed. She refuses. She says that she has 5 male nature spirits (Gandharva) as her husbands always with her to protect her. Not considering to her voice, Keechaka tries to catch her. She ran away. Malini comes to Valalan (Bhima) and tells her sorrow. Valalan made a plan to kill him without knowing others. He tells her to inform Keechaka to come to the dance room in the night. Later Valalan covers his body and sit in dance room. Keechaka thinks that it is Malini and touch the body from behind. Then he feels that the body is very hard like a rock. He came to know that the person sitting there is not Malini. Then suddenly Valalan takes hold of Keechaka's throat and suffocates him to death.