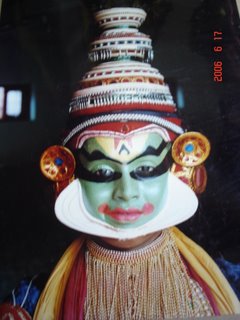 Every country or region has its own traditions and practices. No place is an exception for that. There are many art forms which are formed and developed in Kerala. I want to throw a light on some of them. It includes the world famous Kathakali, U. N. recognized Kootiyattam, Mohiniyattam etc...

Kathakali is a sophisticated art form developed by Kottarakkara Tampuran. It is formed from many then then existing art forms such as Krishnanattam, Kootiyattam, Mudyettu, Garudan Tookkam, Theyam etc. The basic themes adopted in Kathakali are mainly from Mahabharatha, Ramayana, Siva Purana etc. But there are even stories in Kathakali from the life of Jesus, Sree Narayana Guru, Harichandra, Nala etc. Initially, when Kottarakkara Tampuran formed this art form it contained stories of Rama and hence its name was Ramanattam. Then later on it evolved into all major areas of Purana and the name is slowly transformed into Kathakali.

The basic form of Kathakali is to express the idea through body language. Hands, eyes, legs etc. are very much invloved for the same. The story will be narrated in the form of songs sung by two singers. According to the song, the actor will express his ideas. The background includes special Kerala drums - Chenda, Maddalam, Chengila, Ilattalam, Idakka. The songs are written in the form of a special literature stream in Malayalam called "Attakatha".

Now this is enough...

I will post the answers for these after some time.
Posted by Ganesh-Iyer at 4:59 PM 2 comments: