Let's discuss something about the rituals in Kathakali. We already mentioned a few things regarding the same before.

The standards and customs are standardized by Kaplingattu Namboootiri. As I mentioned earlier, it is basically adopted from Krishnanattam and Koodiyattam.

The three main requirements are:

In earlier days, when there is no electric lights used, the Kathakali was performed in the light of a big lamp (about 1 meter height). That lamp provided enough light for the performance. So now also as part of tradition, Kathakali performances are done with that big lamp lighted and kept in front of the stage. That lamp usually will be lit by the fire taken either from inside the Temple or from the lamp which is kept in the dressing room (called as Aniyara). 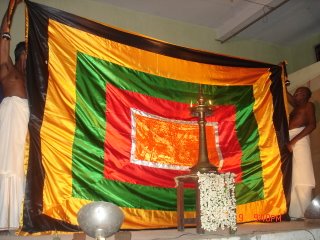 Curtain (called as Tirasseela) is used just like that used for any other drama performances mainly between different scenes. This is usually a multi-colored cloth piece bigger enough to cover the entire stage. Two people will hold it on both sides whenever required.

Stools are required for the actors to sit. It is also used by some actors to stand on it, especially when they want to simulate the chariot ride.

Some other things which are required for Kathakali at the stage are Shangu, Alavattam etc required mainly for Thiranottam (we will discuss this later).

As we discusses briefly before, Kathakali starts with the "Kelikottu" in the early evening (6.00 PM - 7.00 PM usually). This is to inform the local people that there is Kathakali in that evening.
It is a percussion concert.

There are a few items which will be done before the start of the designated play. The first one is the Arangukeli. It is to give salute to Lord Ganesha (He is the Lord who removes all obstacles). This is done by Maddalam and Cymbals. It follows Vandana Sloka (Again praises for God and Saints). This follows Todayam. One or more artists in the training dress will play some steps inside the curtain. Most of the lyrics are from Hindu mythology. Nowadays Thodayam is not usually performed in stage.

Purappadu starts after this. Usually Purappadu is suppose to give a clue about which story is being performed on that day. Usually the Hero and spouse will come and play the Purappadu. So the lyrics will be taken from some part of the first story. Nowadays, Purappadu is being performed mostly by Krishna and sometimes accompanied by Rukmini/Balarama/Subhadra. Basically the lyrics are taken from the story "Rajasuyam". It is assumed that God is satisfied with the Todayam which was performed just before that and they are coming to bless the audience. Some times the Purappadu is performed as Sree Rama and Lakshmana and some times Pandavas and Panchali and even some times Nala and Damayanthi.

After Purappadu is the Manjutara and Melappadam. If Manjutara is to show the ability of Musicians, then Melappadam is the performance to show the expertness of percussionists. The lyrics are mostly taken from Jayadeva's Geetha Govindam.

After this, the play starts. Generally for some characters, there is a ritual called as Thiranottam. This is basically looking by lowering the curtain half down. Regal characters (eg: Ravana, Duryodhana) will do this Thiranottam mainly by their eyes. the strong (eg: Hanuman, Veerabhadran) and bad (eg: Dussasana, Bali) characters also have Thiranottam which will involve more body movements.

Kathakali make -up will take long time for the completion. It involves the process called "Chutti". This is basically a part of make-up in the face. You might have noticed a long extended white make-up on many Kathakali charecters. It is nothing but "Chutti". It is not easy to do this. "Chutti" by itself is a degree course in Kerala if I am not wrong. This make-up system needs very care and time. Each charecter will have different type of "Chutti" form. For example the "Chutti" for "Pacha" charecters is not te same as that for "Red Thadi" charecters.
There are some charecters who doesnot require this. For example "Minukku" charecters in general willnot have "Chutti" on their face.
Posted by Ganesh-Iyer at 4:51 PM No comments:

The steps of performing Kathakali

Again I am back with something else. I hope you enjoyed the previous posts. Now I would like to discuss a few things about the steps before starting a Kathakali performance.
The Kathakali is usually performed throughout the night. It starts of with the so called "Keli Kottu". It will be usually conducted in the evning to indicate that Kathakali is there that night. In the night Kathakali will start of with " Todayam -Purappadu". It is basically praises of God - mostly Krishna - to get the blessings. After this will be the "Manjutara - Melappadam". It is to show the capabilities of the co-artists and singers in front of the audiance. Then starts the play of a story which is decided to play that day. Usually there will be two or three sories in a day. It can also happen that they may play only one lengthy story that day. It depends on the duration of the play as well as the length of the story.
Posted by Ganesh-Iyer at 2:12 PM No comments:

I hope you enjoyed the last post. Now I would like to post something regarding the different types of dress forms in Kathakali. The major types are:

Pacha is the form of dress mainly used for people who are "Satwik" in nature. Usually good characters like Krishna, Arjuna, Sree Rama, Nala etc. will have this form of make-up. Where Krishna and Sree Rama belongs to a special class of Pacha called as "Krishna Mudi" -means they will have small crown which is decorated with beautiful iridescent blue-green or green colored plumage. Others will wear a round shaped crown. Generally they are good characters.

Katti is used for the charecters like Duryodhana, Ravana who are kings but having bad behaviour in them . They generally belongs to the class of "Rajasa" behaviour. They will generally have a sword with them. The word Katti means sword in Malayalam. The make-up for Yama - the destroyer for all people in the world (of course the ultimate destroyer is Lord Siva) has katti make-up but it is slightly different. When usual katti forms are called as Nedum-Katti, this is called as Kurum Katti. It will have a small black mixed with green make-up unlike usual katti make-ups where the make-up is red mixed green.
Tadi is a general term where there are three different categories for it:

We will see each one now.

Red Tadi is basically for the charecters having "Tamasa" behaviour. The examples includes Dussassana (brother of Duryodhaha), Bali, Sugreeva, Trigartha (A companion of Duryodhana) etc. who are very rude in their behaviour. They will have a huge red colored beard in their face. White Tadi is for the charecters like Hanuman and Nandikeswaran. They have a white beard in their face. Similarly the Black Tadi charecters have a black beard in their face. The main charecter in this make-up is Hunter (Kattalan - people living in jungle). Some other examples are Guhan in Sreeramapattabhiskekam (Sree Rama becomes the King of his country), Malayan in Nizhalkuttu (Killing using shadow) etc. There is another type of Kari for bad female charecters. They have complete black make-up similar to the male Kari charecters. The examples include Soorppanakha in Ramayanam, Pootana in Pootanamoksham (Moksha of Pootana), Nakratundi in Narakasuravadham (Killing of Narakasura) etc.

Now with respect to Minukku, there are several categories. Ladies, Sages, Brahmins( people belongs to the upper cast in Hindu mythology). They have very simple make-up system as compared to the above described systems.

Even though these are the main types of charecters, there are several charecters having different style of make-up. Examples are Hamsam in the story of Nala-Damayanthi, Jadayu in the story of Rama etc are birds having a beak fitted in their mouth and wings attached to it. Another category is charecters like Valalan (Name of Bhima during the period of Ajnatavasa) and servant in Uttaraswayamvaram (Marriage of Uttara), Mannan (Washer man) in Lavanasuravadham (Killing of Lavanasura). There are some funny chareters also in Kathakali. These jokers are named as Bheeru or Peeru. They will make-up not according to the rules of Kathakali. Some other rare charecters are Angatan in Balivadham (Killing of Bali), Buffallow in the story of Nala, Mandara in the story of Rama etc.

I think that is enough for now. How are you feeling about Kathakali now? Are you getting bored because of these? Then expect something else soon. What can we discuss next?

The basic process in Kathakali?