This is a story taken from the "Vanaparvam" of Mahabharatha. It is written by the great Attakkatha composer, Kottayam Tampuran.
Immediately after Pandavas were sent to Forest by Duryodhana (so the sory starts in the middle of Duryodhanavadham), Dharmaputhra and Panchali were thinking of how to feed the Brahmins who followed them to the jungle. So they decided to see "Showmya Muni" (not sure the exact name). The sage sugested them to pray Lord Surya (Lord Sun). Upon their pray, Lord Surya is coming in front of them and presented them "Akshaya parthra" with the condition that this special vessel will be full of food until Panchali is taking food. One day, Sree Krishna came there and seeing the difficulties faced by Pandavas, He became angry and thought "Sree Chakram" to kill all Kouravas. "Sudarshana Chakram " will appear in front of Him. But then Dharmaputhra will stop Sree Krishna from doing this action.
Duryodhana came to know about the "Akshayapathra labham" of Pandavas. So he decied to send Sage Durvasav and his 10000 diciples to the place of Pandavas just when Panchali finishes her lunch. So dharmaputhra will request them to take bath and come back for the lunch. Then Panchali will pray to Lord Krishna and Lord will immediately appear in front of her tlling that He is very hungry and he will get a single rice from the "Akshayapathra" and Lord will eat that rice. Immediately sage and his disciples will feel that their stcmach is full while they are taking bath. So they will bless Pandavas from near the river itself and will go back from there.
One day, the sister of Kirmeera (Simhika) will come near Panchali in the form of a beautiful woman when Pandavas are not present there and will start talking each other. Slowly she will take Panchali to the inner forest. After some time, Panchali will tell that she wants to go back. Then the Lalitha will take her real form and will tell that she will eat Panchali then. Hearing the crying of Panchali Sahadevan will come with a sword and will break Simhika's ear,nose, breast etc. She will run away from there towards and Kirmeera will become angry uopn knowing this incident. He will fight with Sahadeva and will caught him. Then our Bheema will come there and he will kill Kirmeera in a fight.
Ususally in most stages the scene "Lalitha and Panchali" is used to play nowadays. This is a story where "Ninam" is also present. ("Ninam" will be coming near Kirmeeran). Also the crown for Lord Surya will contain some additions to indicate the rays coming out of Him. Sudarshana Chakram has special make-up on the face to reflect the charector. Also there will be "Panthams" on both hands of Sudarshana Chakram.
Posted by Ganesh-Iyer at 4:13 PM No comments: 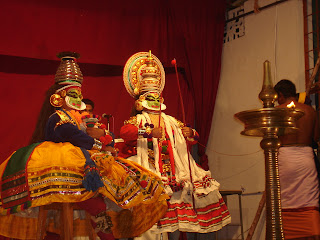 Written by Shri. Mandavapilli Ittiraricha Menon (1745 AD to 1809 AD), this story is explained in Slokas 22 to 66 in 89th Chapter of the 10th Canto of Sreemad Bhagavatam (The story of Lord Vishnu). Another great story in Kathakali, Rugmangada Charitham is also written by the same author.

This is a touching story of a Brahmin whose all the 9 babies died immediately upon birth. This is also a story of Lord Krishna removing the evil thought from Arjuna that nobody is there to beat him in this world.

One day, Arjuna will come to Dwaraka. Sree Krishna asked whether all Pandavas are fine? Arjuna told that with the blessings of Lord Krishna all are perfectly fine there. Sree Krishna then asks him to stay there for some days and Arjuna agreed with that.

On a fine day, one Brahmin will come to the Yadava Sabha ca 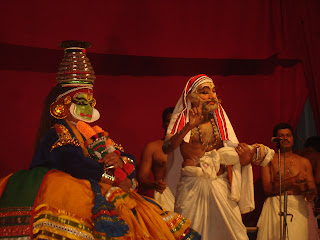 rrying the dead body of a new born baby and he tells that his eight kids died upon birth and this is the dead body of the ninth one. He wanted to show this to Balarama and Krishna and ask them to help him. Lord Krishna and Balarama won't mind him at all. Hence non of the Yadavas will mind him. After some time, Lord Krishna and Balarama will go out of the Sabha without telling even a single word. Arjuna is not able to tolerate the condition of Brahmana.Arjuna will tell that he will give the next baby who will born for this brahmin. Then Brahmin will start accusing Arjuna out of desperation and when Lord is also helpless, he lost all his hope. Atlast Arjuna will tell that if he is not able to save the next baby from death, he will jump into fire along with his great bow and arrow. When Arjuna promises in the name of Lord Krishna's lotus-legs, Brahmana became happy and he left the place.

Brahmana reaches back his home and tells the entire incident to his wife. Then she replies that as Lord Krishhna is not there to help them, she lost her hope. Then Brahmana replied that Arjuna promised that he will jump into fire if he cannot keep his promise. Lord won't leave that promised Pandava. So be happy that Lord Krishna will save our next kid.

Scene 4: (After a few months) Brahmin, His wife, Mid-wife 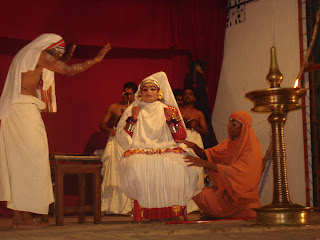 In due time, the Brahmana wife will become pregnant. She will tell Brahmana that the delivery is going to happen soon. So please inform Arjuna immediately. Then Brahmana will call a "Vayattatti" (Mid-wife) to take care of his wife. He then went to Dwaraka to see Arjuna.

Brahmana tells Arjuna that his wife is going to deliver a baby soon. So come with him and save the baby from death. Arjuna will go along with the Brahmain and he will make a house out of his arrows in such a way that there is not even a single hole for even a single sun ray to come inside. Then Brahmana will call his wife along with the "Vayattatti" to go inside the arrow-Dom for the delivery. After sometime the "Vayattatti" will tell that even the kid's dead body is also not present there. Arjuna is shocked to hear this. Brahmin blaims Arjuna for giving unnecessary hope and tells him to go and enjoy his life.

Arjuna went in search of the kid everywhere and reaches Yama's palace. He asks Yama about the kids with a lot of anger. Yama replies saying that he doesn't know about those kids in Dwaraka and that he has not kept any such kids with him. Chitragupta agrees to the same.

Arjuna, then reaches heaven and asks his father Indra about the kids. Indra replies saying that he is unaware of those kids from Dwaraka. He asks Arjuna to seek help from Krishna for the same.

As Arjuna is unable to find the kids, he decided to keep his promise. He made a fire and when he is about to jump into it, Lord Krishna will appear in front of him and will stop him from jumping into the fire. Lord Krihna told, "It is world famous that Krishna is there always for Arjuna. when I am there to help you from any problems, why are you worrying? All the kids are safe in Vaikunta and we will take them and give them to their parents ". Then they went to Vaikunta. On the way when darkness prevailed, Lord will think about "Sudarshanam" and Sudarshanam will show the way to Vaikuntam. 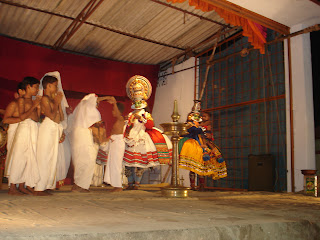 Lord Krishna, Arjuna and the ten kids came to Brahmins house and Arjuna gave all kids to Brahmin and Brahmin overwhelmed with joy and praises Lord Krishna and Arjuna.

Characters in the story