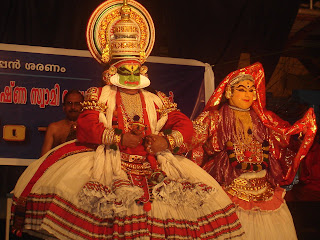 Nala and Damayanthi got married. Nala and Damayanthi enjoys by talking various things and they go to Nala's garden. Damayanthi is astonished to see that beautiful garden. Then they spend some time in the garden. In the next scene, Kali and Dwapara see each othen on their way to earth and during their talk, both realised that they are in fact going to the same place- For marrying Damayanthi (Both of them are unaware that Damayanthi is already married). They decided to go together and they see Indra, Agni, Yama and Vayu coming from earth back to heaven. Kali and Dwapara salutes them and asks whe 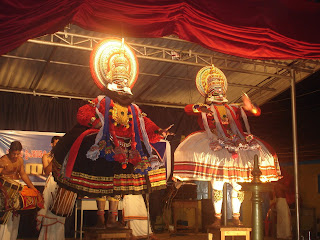 re are you coming from? Indra will tell that they are coming back from long distanceand he asks where Kali is going? Kali tells that he is going to marry Damayanthi. Indra laughs at him and tells that Damayanthi's marriage with Nala is over and that they are coming back after attending that marriage ceremony. Kali got anger and he blames them for just attending the marriage function instead of marrying her. Then Kali decided to separate Nala from Damayanthi and also to get them out of their country. Kali and Dwaparan thinks about the palns to cheat Nala and th 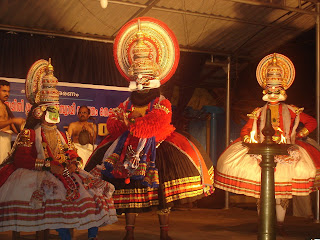 ey decided to meet Pushkara (A distant relative of Nala). Kali can live in somebody if they do some bad things. When Kali observe Nala, he realised that Nala is perfect in all aspect. He waits in a tr 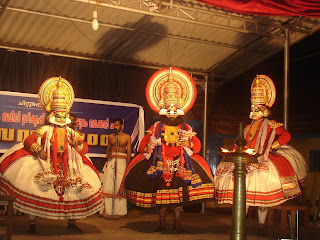 ee for 12 years and at last one day he saw that Nala fogot to put water on his leg's backside when he pray to God. So Kali enter Nala's body. In the third scene, they came to Pushkara's palace and meets him. Pushkara starts telling his worries to them and then Kali starts telling lot o 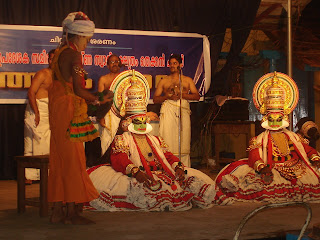 f things to Pushkara and he successf 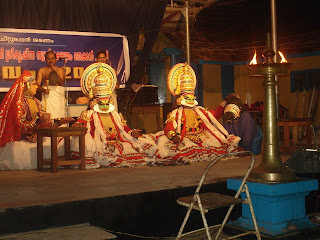 ully influenced and changed the mind of Pushkara. Kali told him to call Nala for playing game of dice and tell that Dwapara (In the form of an ox) will be given if he looses the game. Pushkara agreed to this and he challeges Nala. Nala came there and he looses in the game. The punishment is to live in jungle forever. Nala and Damayanthi went to jungle to keep the promise. Pushkara orders the people in the country, not to give even a piece of cloth to them. In the jungle, Kali in the form of a bird will come and take Nala's cloth away. When Damayanthi sleeps in Nala's lap, due to the effect of Kali, Nala goes away from there and when Damayanthi wakes up, she see that Nala is miss 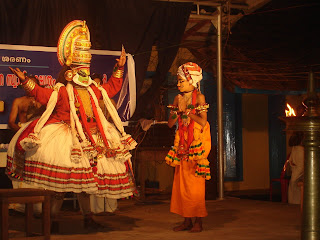 ing. She cries in search of Nala in that big jungle. At that time a snake catches Damayanthi's leg and started swallowing her. She cries loudly. A hunter in that jungle hear this sound and he saw Damayanthi. He kills that snake. Damayanthi expresses her gratitude to him. But he asks her to live with him. Atlast as there is no other way to escape from him, Damayanthi curses him and he burnt into ashes due to he curse. (Normally till here is shown in stages). Then Damayanthi wanders in the jungle and she meets some traders 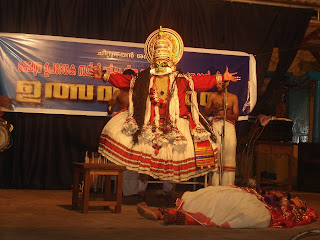 and with their help,, she reaches Chedi country and she becomes a servant of the queen over there. Sudevan, a brahmin sent by Damayanthi's father to find Damayanhi reaches there and realised that this servant is Damayanthi. thus Damayanthi reaches her Father's palace. This is Nalacharitham -part II. The characters are: 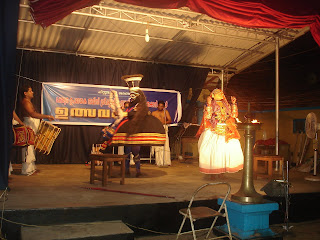 Hey,
I'm doing a research about make-up in kathakali, specially on the play Nalacharitham, and your blogs on the first two days are very helpful, because they say exactly what make-up do the characters use, but I need the make-ups for the next two days, could you please (if you know), send me the names of the characters in the days 3 and 4 with the make-up types they use please?
My mail is: nicolas.coppellotti@gmail.com


Do you need a financial help? Are you in any financial crisis or do you need funds to start up your own business? Do you need funds to settle your debt or pay off your bills or start a good business? Do you have a low credit score and you are finding it hard to obtain capital services from local banks and other financial institutes? Here is your chance to obtain a financial services from our company. We offer the following finance to individuals-
*Commercial finance
*Personal finance
*Business finance
*Construction finance
*Business finance And many More:
and many more at 2% interest rate;
Contact Us Via Email:bullsindia187@gmail.com

Thank you very much sir
It's a big help for us