Duryodhana Vadham is written by Vayaskara Arya Narayanan Moossatu. The play consists of the main parts of Mahabharata. 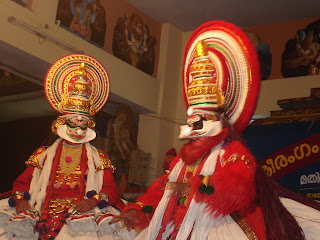 [Bhanumathi tells about the newly built palace of Pandavas to her husband Duryodhana. Duryodhana decided to see that beautiful palace.]

Duryodhana and other Kauravas went to see the beauty of Indraprastha, the new palace of Pandavas. The palace was built by the Asura architect Mayan who had built the palace with his magical skills. The Kauravas were completely confused by the construction and mistook the floor to be a pond and a pond to be a floor and fell and got drenched. Draupadi and Bhīma laughed at them. Yudhishtira advises Bhīma not to laugh at anybody because it will cause unwanted events to happen. This incident filled Duryodhana with anger and embarrassment and he decided to take revenge and left the palace. 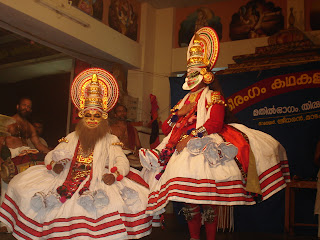 Duryodhana approaches Sakuni, his uncle. Duryodhana’s padam starts with- mamatha wari rashe---- in which he expresses the shameful incident which happened to him and how he feels hurt and humiliated by the laughter of Bhima and Draupadi. Sakuni tries to console him. Padam- Paritapam hriti karutidenta--- in which he tells Duryodhana how he can defeat Pandavas by cheating in the game of Dice. He also tells Duryodhan 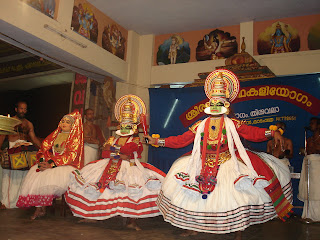 a to seek permission from his father and invite Yudhishtira for the dice game. Duryodhana happily agrees to the plan.

Pandavas came to see the newly built “Keli Gruham” (Play house) of Duryodhana. Duryodhana tells Dharmaputhra, “Hey great son of Yama, you are an expert in the game of dice and hence I desire to watch a game between you and my uncle Sakuni. If my uncle is defeated, I promise you that I will give you the penalty.”
Dharmaputhra replies, “The game of dice brings sorrow, it destroys the happiness, it creates 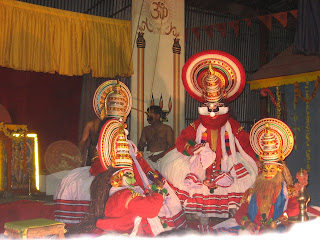 mayhem, but it is decided by Lord Brahma that kings should play the game of dice. So I will play without any worries after offering prayers to Lord Krishna.” (Duryodhana expresses his irritation upon hearing the word Lord Krishna). Dharmaputhra continues “But my brother Duryodhana and my uncle Sakuni - please don’t cheat me in the game.” Sakuni replies,” What is the use of cheating in the game of dice. Don’t tell such nonsense. As per God’s wish, victory and defeat will come. Dharmaputhra, please do come and sit with us for the game”. 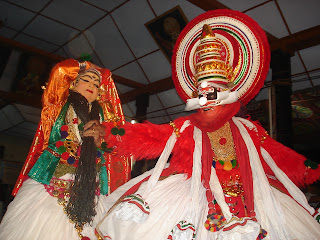 Then the game starts. Dharmaputhra starts seeing his defeat. He gambles away not only his army, palace, wealth and kingdom, but also one-by-one all his brothers, himself and their wife-in-common - Draupadi. Duryodhana overwhelmed with joy orders Dussasana to bring Draupadi and commands her to do the servile job. When she refuses to come there, Dussasana pulls her hair and drags her to the court. She asks for mercy and nobody including her husbands (because they are now servants of Duryodhana) hears her plea. She prays to Lord Krishna to help her. Dussasana tries to disrobe her in public. Lord Krishna helps Draupadi as a savior. Draupadi 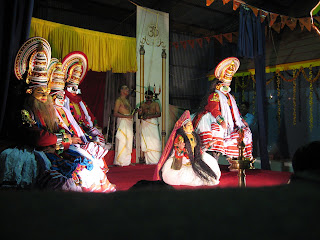 curses them, “Sakuni, who cheated my husbands in the game of dice and made them servants, will be killed by Sahadev during the battle. Dussasana who tried to humiliate me in front of the public will be killed by Bhīma and Bhīma would rip him open and drink his blood and my own hair would remain disheveled until the fulfillment of the curse. Bhima will kill Duryodhana by crushing his thigh with the gada.” [Drutharashtra tells Draupadi to stop the curses and tells her to ask anything she wants. She asks her husbands along with their weapons back. She got her husbands back. This part is not shown generally.] As a result of the second dice game Duryodhana orders, “Hey Pandavas! Live in thick forest for 12 years. And 13th year, lived incognito. If you are recognized during that period, the same will be repeated again.”

[After 13 years of exile Pandavas return to ask their rightful share back which is denied by Kauravas. As a last attempt for peace Lord Krishna is requested to go to Duryodhana as a messenger. Dharmaputhra tells Krishna to ask for half country. If not, at least 5 villages. If not, at least 5 houses, or even one house is enough. That is the greatness of Dharmaputhra.] 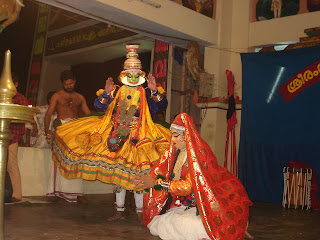 Draupadi comes near Lord Krishna, “Krishna, When Dussasana tried to humiliate me in front of the public, you only saved me from the humiliation. Krishna, when you are going to ask for our portion, you please remember my disheveled hair.”
Krishna replies, “My friend, Draupadi, don’t worry. You are the Queen among all women. All your wishes will soon come true. Please wait for that auspicious time. The bad act of Dussasana was a decision by God.” Thus Lord Krishna consoles and sends her back Lord Krishna then makes all the arrangements for his visit to Hasthinapura (Palace of Duryodhana). 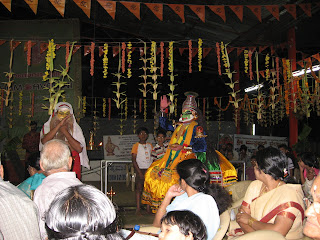 [Duryodhana tells Dritarashtra that Pandavas should get the justice and also to tell his son to do the needful.]
Duryodhana gets the news of Lord Krishna’s arrival at his palace. Duryodhana ordered all people in the palace to give no respect to Krishna. Even though they agreed with him, when Krishna arrives in the court, all of them praised him and gave full respect. [Krishna will come through the audience with Alavettam, Venchamaram, Panchavadyam, and Muttukkuda] 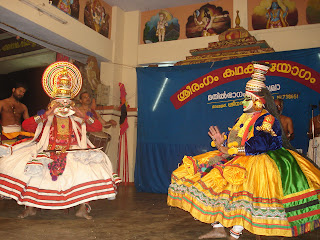 Krishna addresses Duryodhana. Krishna requested him to give half of his country, then five villages, or five houses or at least one house to Pandavas. Duryodhana refuses to give even to give space taken by a needle point. Duryodhana in a fit of rage orderes Dussasana to get a cord to tie Krishna. Krishna takes the Vishwaroopa(his cosmic form) and all Kauravas in the court fell down except all Mumukshu (noble hearted people). These Mumuksu told Duryodhana to 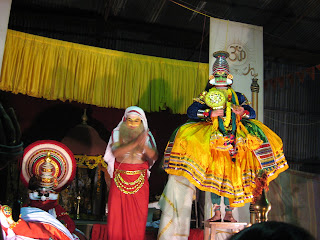 give whatever Krishna requested to save his own life. Lord Krishna leaves the palace; Duryodhana and Dussasana wake up and decide to go ahead with the battle.

[Arjuna wants Hanuman to be there and Hanuman appears and tells that he will be there in the flag of Arjuna to kill the enemies. Then Arjuna and Krishna is going to the battle field,, 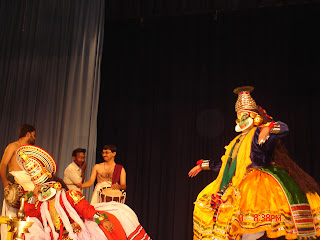 and seeing all brothers and relatives in the battle field, Arjuna fainted. Then Krishna adviced the Great “Gita”. Then Arjuna became strong and started the battle.]

In the battle field of Kurukshetra, Bhīma filled with anger faces his arch rival battles Dussasana. With the blessings of Lord Narasimha Bhīma kills Dussasana and ripples him open and drinks his blood, thus fulfills the vow of Draupadi.

[Then Duryodhana came for the battle, after a long battle, Krishna gives the sign of killing using 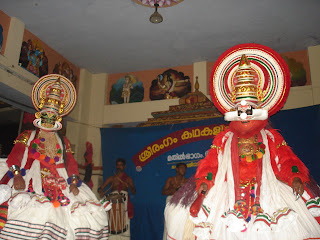 the “Gadha” on the thighs of Duryodhana. Bhima did the same and Duryodhana fell down. Then Bhima told each and every bad thing happened in Pandava’s life because of Duryodhana and at last Duryodhana passed away. Then “Vethalams” came there and did some dances to express there joy.]

Later Lord Krishna calms him down and blesses him.

NOTE: The scenes written in bracket is not shown generally.

Just enjoyed a workshop and a performance of this exact story in Kerala last week. Thnk you so much for sharing the story... some of it got past me in translation... (I am most familiar with the Baghavad Gita).

thank you for this story in such a simple language... :)

interesting read. I would love to follow you on twitter. By the way, did you guys hear that some chinese hacker had busted twitter yesterday again.

At last, I found this post once again. You have few [url=http://tipswift.com]useful tips[/url] for my school project. This time, I won't forget to bookmark it. :)

Nice post and this mail helped me alot in my college assignement. Thank you as your information.

Wonderful story written so simply. I am just back from a performance in Palakkad. Great production by Kathakali Trust.Kala Soman Kott. Devadas Ko Unnikrishnan Kot Harikumar. Thank you all

A big thanks to dr Ogbefun for helping me to cast death spell on my uncle who killed my parents because of his company, and the matter was taking to court and was not giving justice because i was not having any prove not until i came across this great spell caster online and i explain everything that happened to him and he promise to help me cast the spell within 48 hours that i should send my uncle full name and his picture that is going to confess before he die which i did as he commanded. within 2days my uncle started confessing and finally die. am grateful for what dr Ogbefun did for me and with that i promise to share this testimony to all the viewers around the globe, after he cast the death spell. you can contact ogbefun for any death spell, such as to kill your superior in the office and take his or her place, death spell to kill your father and inherit his wealth ,death spell to kill anyone who have scammed you in the past, spell for increase in salaries, spell for promotion at the office, spell to get your ex lover back, if things is not working well in your life then you need to contact him now via email ogbefunhearlingtemple@gmail.com add him on whatsapp line +2348102574680.